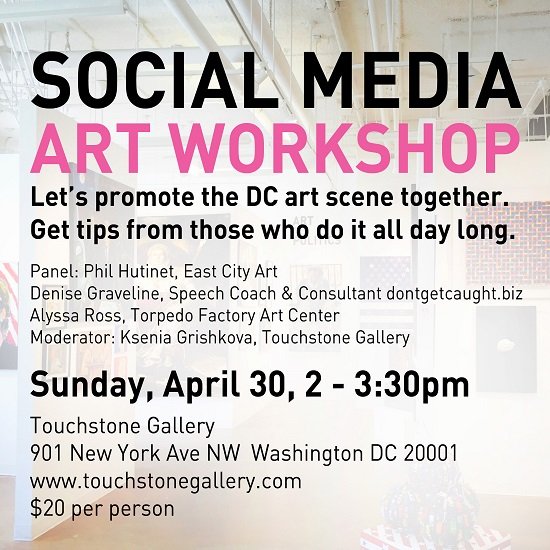 Ask your question while reserving your spot: https://www.touchstonegallery.com/shop/social-media-art-workshop

Phil Hutinet, a third-generation Capitol Hill resident, is the publisher of East City Art which he began in 2010 to document and promote contemporary art in the DC region. In 2012-2013, his consultancy work east of the river yielded the Anacostia Playhouse, Craig Kraft Studios, the Anacostia Arts Center and the 2012-2013 LUMEN8ANACOSTIA festivals. He currently produces EMULSION, East City Art’s annual regional juried show. Hutinet has been interviewed by or has made appearances on the BBC, Capital Community News, Washingtonian, Washington City Paper, The Washington Post, WOL Radio, WJLA ABC News Channel 7/Channel 8, WTOP and other local and national media.

Denise Graveline is a Washington, DC, communications consultant and speaker coach who shares social media strategies with her clients, and uses it herself to promote her business. She’s also an artist and former member of Touchstone Gallery, and helped the gallery get its social media presence started.

Alyssa Ross has worked in nonprofit and arts communications for more than 15 years and knows how to work on a shoestring budget. Ross was an early adopter of social media as a communications channel, launching a MySpace page for Tacoma Art Museum in 2005, a year before Facebook was open to non-college students. Today, she’s responsible for the Torpedo Factory Art Center’s accounts and has overseen significant growth in followers and engagements.

Moderator: Ksenia Grishkova has worked in the arts management field for the last 17 years in Washington, DC, Moscow and London. She has been the director of Touchstone Gallery since 2007. In addition, Grishkova is also the executive director of Touchstone Foundation for the Arts, an organization she helped create in 2012. As Touchstone director, Grishkova has worked on numerous 100+ artist group exhibitions, including national juried shows like “Art as Politics” in 2016 that generated unprecedented public attendance and press coverage. She also coordinated numerous joint art projects with embassies and DC based non-profits and helped oversee Touchstone’s move to a newly build street level location.

Register for classes and workshops today.

November 2021 at the Smithsonian American Art Museum and Renwick Gallery

Join the Smithsonian for their November events.