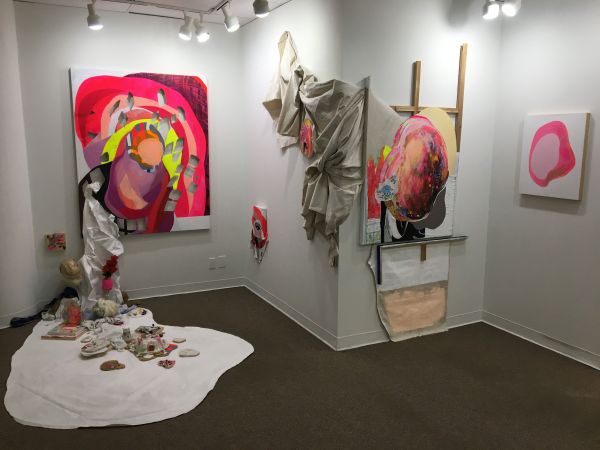 The six artists appearing in INTIMATE gathering presumably know each other’s idiosyncrasies–they share studio space together at Red Dirt Studio.  Their group show now on view at Bethesda’s WAS gallery invites the viewer into their close orbits as personal details and self-reflections are put on public display.  Curated by fellow artist Leslie Holt, who has written a well-conceived gallery statement to accompany the show, INTIMATE gathering spans a wide variety of media that cleaves to a conceptual ethos of personal sharing rather than presenting works that visually coalesce.  The elevation of concept over content does not dilute the quality of the work, but it does mean the viewer will need to dive deeply into each piece to dissect its assorted meanings.

It is easiest to consider the exhibition as a series of vignettes where each artist attempts to connect with the viewer in his or her own fashion.  This viewpoint is underscored by the gallery’s physical layout, where installations by three artists share one large space with the remaining artists each given separate smaller rooms.  With paint, neon, wood, clay and video all jostling for attention it is hard to know how to organize one’s first impressions, but the artists can roughly be categorized into two complimentary approaches:  those who encourage viewers to be open to life’s intimate moments in general and those who open up to us by sharing a piece of themselves.

Amy Hughes Braden’s cultivated chaos demands the viewer’s attention not only with its color palette but also through its frenetic unfolding upon the gallery floor.  On the left the three-dimensional A Little Troll or Soft Old Woman Hiding in a Pink Cave starts as a wall-mounted painting before morphing into a foundational support for several smaller works with cheeky titles such as Bras That Don’t Fit and Most of My Evenings.  The vertical component of the work is a study in pinks and purples and features curiously designed cutouts that give a slight depth of shadow to the gallery wall.  The shapes of smaller works resting upon the floor vaguely mimic voids within the painting, suggesting that perhaps they could have originally been a component of the larger work itself.  These smaller works utilize a wide variety of materials—from cheap gems and found objects to beads and glitter—as their visual vocabulary.  Her other large-scale work The Infinite Histories of Mothers uses a similar visual technique, as its canvas appears off a wooden frame to wrap itself around the intersection of two walls.  While the work is visually brash the emotional component is more subtle, its nuance suggested by the individual titles.  Here Hughes Braden seems to grapple with balancing her duties as a mother and family caretaker with her creative passions as an artist. Ideas that germinate as paintings, “high art” if you will, find their culminations as jumbled assemblages; one can almost see the artist grappling with the desire to stand and paint while also wishing to creatively engage her toddler on the floor. Individual pieces may lack context but taken together the installations represent a powerful juggling act to which any parent can relate. 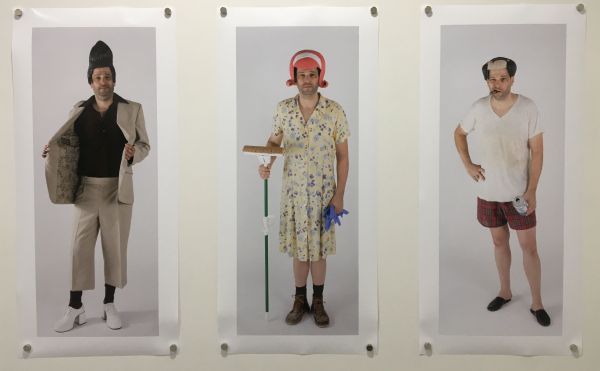 Mike Corigliano takes a similar tongue-in-cheek approach to display his emotional vulnerability, using “wigs” composed of stoneware clay and wax as indicators of social and gender roles.  Bachelor Wig, Single Parent Wig and Curmudgeon Wig are displayed alongside photographs of Corigliano wearing the headpieces in publicly-staged actions or simply posed in front of a backdrop.  Where Hughes Braden subtly implied social roles, Corigliano is more visually direct in his messaging.  He invariably looks goofy (the pompadour in particular is over the top) and slightly awkward, but that is his intent.  His attempts to represent facets of his identity–father, eligible bachelor and homemaker demonstrate how the roles we play in social situations become characters in the eyes of others.  Furthermore, his comedic panning for the camera emphasizes the inner uncertainties one faces in trying to define oneself to the world even as he simultaneously attempts to downplay that uncertainty through use of humor.  While the persona demonstrated by Single Parent Wig is eyebrow-raising in particular, with the artist appearing in drag to make his point about gender stereotypes, all the characters portrayed by the artist are grounded in archetypes and highlight the difficulty in trying to define oneself in contemporary society. 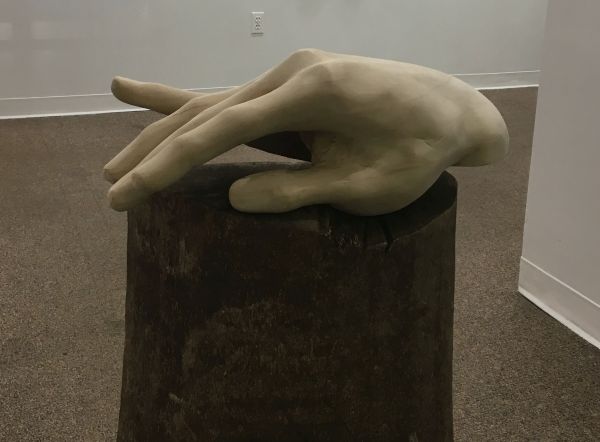 Lorenzo Cardim echoes Hughes Braden’s and Corigliano’s juggling of gendered roles but in a much more visually restrained manner.  Displayed in the same space as Hughes Braden, Cardim’s two wood sculptures exhibit a subtlety that belies their confrontational attitude towards gender identity.  Untitled (Limp Wrist) displays a larger than life, anatomically detailed hand carved from basswood.  The hand appears surprisingly fleshy and delicate, it’s “skin” silky and smooth.  The form abruptly ends at the wrist, but enough of it is intact to suggest a slight bend at the joint.  That slight bend is balanced by the upturned pinky, posed as if ready to pick up a cup of tea.  The combination is meant to suggest effeminacy—a queer softness—that posits that delicacy is antithetical to maleness.  Yet to both embody the solidity of wood and be created through manual labor display traits that could be considered masculine.  How then can we understand an object imbued with both masculine and feminine attributes?  In a world historically fixated with rigid definitions of gender, that duality runs to the heart of queer theory and Cardim’s search for what it means fully recognize a multifaceted gender identity.  This search reverberates through Untitled (Zipper) which calls attention to how this seemingly mundane device revolutionized the way we dress while visually implying the joining of two disparate halves into one whole.  The blood-red color that adorns four teeth further suggests flesh.  The use of nail polish rather than acrylic paint is also symbolic for its traditional use as a female adornment.  While his work raises more questions than it answers, the intimate detailing of the works forged by hand suggest the artist is personally accompanying us on this journey of discovery. 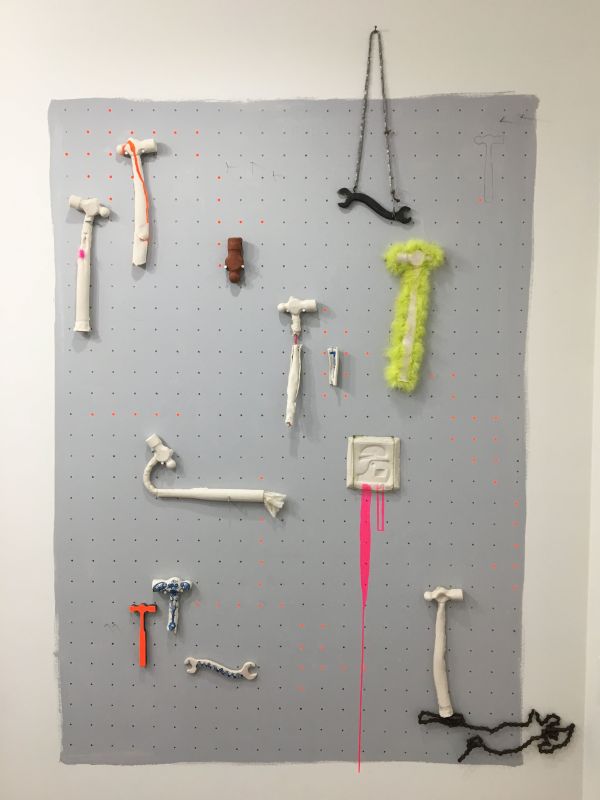 Like Cardim, Gayle Friedman’s multimedia installation is subtle in its messaging.  It also echoes Hughes Braiden in its oblique referencing of familial roles, which means knowing its backstory is important to understanding Friedman’s intent.  Shop Wall features a garage tool rack painted in trompe l’oiel fashion with dark grey dots of paint which resemble peg holes.  The implements hanging from those holes are tools in name only—the hammers and wrenches are ill equipped for construction work.  The tools are formed from porcelain and many are adorned with kitschy materials such as feathers or decorated in Delft patterns.  In reality, these items represent memories of Friedman’s now-deceased parents, whose collectible objects remained after their bodies’ passing.  Steeped in memory, the material components of the items meld together as the passage time begins to erase distinct details.  While there are elements of humor to be found in feathers and kitsch, that mirth stresses a sense of loss.  The fragility of the porcelain echoes the fragility of the body; the cracking ballpeen hammer at the center of the work painfully recounts the breaking of bones.  In creating a memento mori to her parents’ death, Friedman opens herself to a conversation with the viewer about the shared grief we have had or will experience over the passing of loved ones. 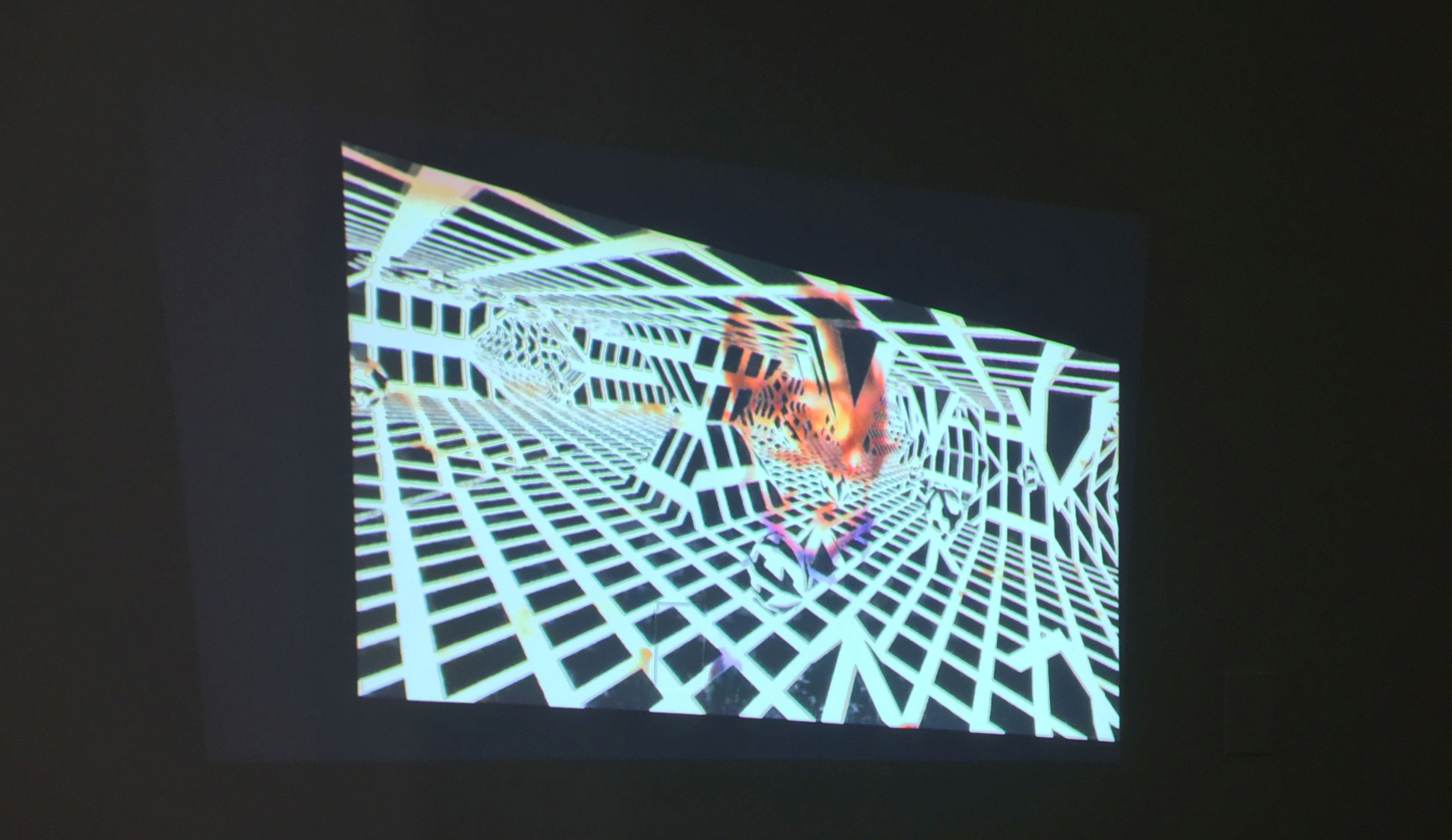 The final two artists approach the idea of intimacy more broadly, with less personal content on display.  The video sequences in How to save your life – Option 4 by Tim McLoraine display snippets of family vacation reels (presumably) with an aged patina suggested by the sepia tones and dated hairstyles.  The visuals are hard to decipher, as they are interspersed with computer-generated architectural forms that continually morph into complex three-dimensional spaces suggesting a pixelated universe. Imagery of a stag captured with night-vision technology prominently repeats through the three minute cycle. While this specific symbol is left purposely vague by the artist, it could be seen as referencing the tree or cycle of life, thus casting the familial imagery into a broader context of the passing of generations.  While we could assume that McLoraine is using personal images from his family collection, that supposition is never clear, and thus his work conjures a sense of intimacy in more general terms by encouraging viewers to consider their own family histories rather than rely on his for inspiration. 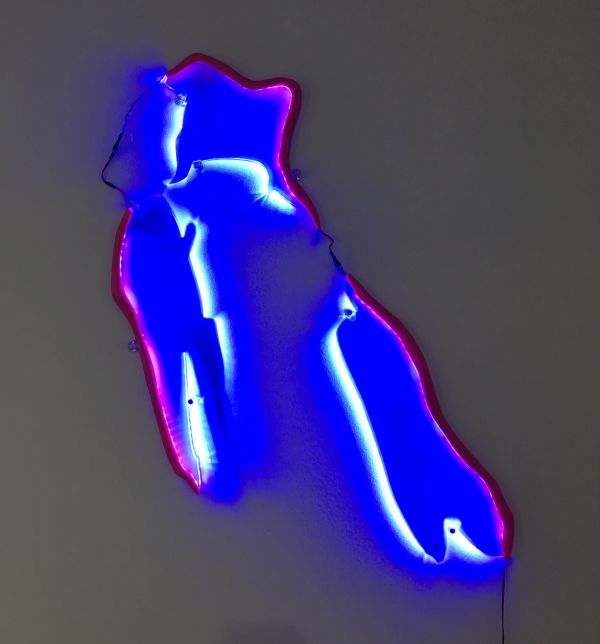 Liz Lessner’s lit wall reliefs and video works are completely devoid of personalized details, delineating the physical intimacy that occurs when we allow close, physical contact with another human being.  Lessner is particularly drawn to that moment when bodies almost touch—when we relinquish personal boundaries— and the space between skin is about to disappear.  Her works presented here in video, mixed-media and neon-style light attempt to capture that negative space, freezing in time a moment when an emotion such as love, tenderness, lust or angst is on the cusp of physical manifestation.  These works are just part of a broader investigation into physical intimacies the artist has undertaken; a recent exhibition at Honfleur Gallery displayed three-dimensional sculptures of this so-called negative space.  And while those sculptures more succinctly elucidate the skins’ boundaries than the two-dimensional works shown here, the two lit works Caesar Shift IV and Caesar Shift V in particular introduce the novel element of an aura, or unseen electrical magnetism between two bodies.

The use (or not) of personal information brings up an interesting question that ripples through the exhibition:  how does the inclusion of an artist’s personal details affect our perception of the work?  Including personal details breaks down the barriers between viewer and artist, establishing an intimacy between the two despite the lack of physical or temporal proximity.  In this regard Hughes Braden, Cardim, Corigliano and Friedman engage the viewer on slightly more visceral level than Lessner or McLoraine with a poignancy accentuated by raw emotion.  All six though, in their own ways, underscore the power of the human connection.

INTIMATE Gatherings runs through July 14, 2018 at WAS Gallery in Bethesda.  For more information, visit the gallery’s website here.